This sandwich right here is a really big freaking deal. Huge. To you, it looks like an ordinary sandwich (well, maybe not because of the bread). I used cinnamon raisin bread, because well that’s the BEST kind of bread there is. Anyways, you’re looking at it probably asking yourself what is so dang special about this particular sandwich. It’s a peanut butter sandwich and an apple. The special part: the fact that there are 2 whole pieces of bread. 2!!!!! Not 1. Not 1 1/2….but 2! I never never never ever eat sandwiches with 2 pieces of bread. I’m scared of it and I don’t like it and I don’t wanna do it. I felt like eating a “sandwich” with 1 piece of bread gave me some type of discipline and control that other people just didn’t have. That’s so not true!!! It means that I irrationally fear a piece of bread. Who in the world is afraid of bread? Me.

I ate that sandwich with 2 pieces of bread because I’ve recently come to a very startling, harsh and horrifying fact that’s staring at me straight in the face. I’m scared/nervous to even type it out. This is my heart on my sleeve. This is an insight into the most vulnerable part of my being. Exposing all of my elements, secrets and disguises.

Some times things just happen to you. I didn’t mean for this eating disorder to happen to me. While it could probably be argued that I did in fact do this to myself, I didn’t realize that’s what I was doing initially. I just thought I was “getting healthy”. I didn’t originally set out to lose more than 5 pounds or just gain a little bit of muscle tone. I didn’t. I didn’t realize that “getting healthy” meant becoming a slave to my own mind, being frightened of almost all foods, being afraid to be around people, sleeping just plain awful at night, having my thoughts consumed with food, and worst of all being unnerved, and sent into an utter panic over my own feelings and emotions that I buried deeper the more I developed my eating disorder.

So, what the heck am I rambling on about? I went to the doctor last Monday so I’ve had an entire week to process and cope with this. When you go to the doctor, they make you get on a scale (which I get on backwards as to not see the numbers) and take your blood pressure. Twas that day that I was suddenly slammed with the reason why I’m so cold all the time, my fingernails are often found a shade of purple, sometimes why I’m kind of mean and angry, and why tired so quickly in the evening. At first I just noticed that my blood pressure was lower than usual. Like way lower. I already have a lower blood pressure but this was abnormal for even me. Then, at the end of the appointment, the nurse handed me this paper that was just going over what the doctor had said to me. I glanced at it, not realizing that it would have my weight on it…..it did. It was at that point, that I realized why I always seemed to live in Antarctica and everyone else seemed to live on a normal continent.

It was at that moment where I felt panic and my heart ached. I never meant to do that to myself. I never meant for things to get quite that bad. I didn’t even realize I was doing it, that it was happening, that things changed or how I even achieved that. I didn’t want my gold star……..

It was at that moment that I realized……I might actually be sick.

But following inspiration people who are doing the same things as me or are a little further along in their journey than me is helpful. Especially when they are so kind as to stop, reach out their hand, and touch others. 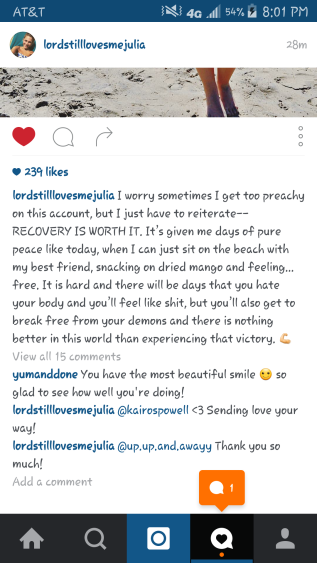 On a much happier note 🙂

I also finished my mini cross stitch this afternoon while I watched a ton of Gilmore Girls AND the Charlie Brown Valentine’s Day DVD I got!! I’m kind of obsessed with Charlie Brown and all things Peanuts. And maybe it’s just me, but this little house I did sort of reminds me of the Blue’s Clues house….haha.

Now I just want to go watch all the animated movies in my drawer!!!! Really, I’m just a child in an adult body.